Pembrokeshire Friends of the Earth - News 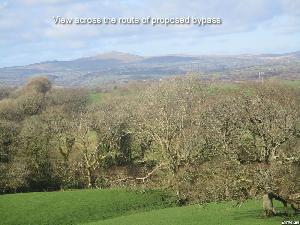 The Welsh Government is proposing to spend £45 million on a by-pass on the A40 from the Llanddewi Velfrey to Penblewin; the journey time savings as a result of the scheme would be 10-20 seconds. They propose spending a further £20 million on a by-pass from Penblewin to Redstone Cross south of the A40 which would pass through woods and farm lands with views of the Preseli Hills.

At this time of Climate Emergency and when a quarter of UK mammals and nearly half of the birds are at risk of extinction, should the Welsh Government be spending money to extend road infrastructure focusing on through-traffic?

Wales risks failing to meet its own targets on carbon emissions unless it changes its over-reliance on the car.

Pembrokeshire FOE and FOE Cymru together succesfully campaigned against the dualling of the A40.

The new Transport for Quality of Life research by Friends of the Earth Nov.2019 shows road schemes

The Welsh Government's own policies prioritise travel by foot, bicycle and public transport. They need to act on their policies.

"The impact of a car focussed system is everywhere from the pollution, the noise, the time wasted in traffic or on poorly integrated alternatives, the impact on individual’s health from pollution but also from not undertaking physical activity. It is a climate issue. And it is a social issue...It is an area which cries out for consideration through the lens of the wellbeing of future generations to switch us away from a trapped way of thinking."( Future Generations Commissioner's', Sense Maker Survey 2017)

A public inquiry is being held this month, beginning 10th of March into the Llanddewi Velfrey to Penblewin bypass . We need you to sign our p